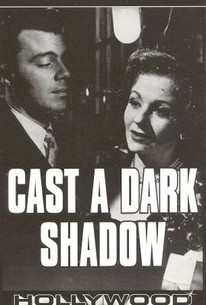 Dirk Bogarde digressed from his usual lightweight image to portray a smarmy murderer in Cast a Dark Shadow. He kills his first wife (Mona Washbourne), hoping to claim her inheritance. Surprise! The inheritance is a myth. Thus Bogarde sets his sights on barkeeper Margaret Lockwood, whom he knows to be heavily insured. But Lockwood is possessed of a naturally suspicious nature, making Bogarde's second murder plot a bit more delicate than his first. Cast a Dark Shadow is a too-literal adaptation of Janet Green's stage play +Murder Mistaken.

Lita Roza
as Singer
View All

There are no critic reviews yet for Cast a Dark Shadow (Angel). Keep checking Rotten Tomatoes for updates!

There are no featured reviews for Cast a Dark Shadow (Angel) at this time.