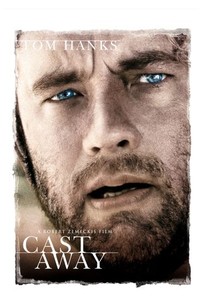 Critics Consensus: Flawed but fascinating, Cast Away offers an intelligent script, some of Robert Zemeckis' most mature directing, and a showcase performance from Tom Hanks.

Critics Consensus: Flawed but fascinating, Cast Away offers an intelligent script, some of Robert Zemeckis' most mature directing, and a showcase performance from Tom Hanks.

Critic Consensus: Flawed but fascinating, Cast Away offers an intelligent script, some of Robert Zemeckis' most mature directing, and a showcase performance from Tom Hanks.

An exploration of human survival and the ability of fate to alter even the tidiest of lives with one major event, Cast Away tells the story of Chuck Noland (Tom Hanks), a Federal Express engineer who devotes most of his life to his troubleshooting job. His girlfriend Kelly (Helen Hunt) is often neglected by his dedication to work, and his compulsive personality suggests a conflicted man. But on Christmas Eve, Chuck proposes marriage to Kelly right before embarking on a large assignment. On the assignment, a plane crash strands Chuck on a remote island, and his fast-paced life is slowed to a crawl, as he is miles removed from any human contact. Finding solace only in a volleyball that he befriends, Chuck must now learn to endure the emotional and physical stress of his new life, unsure of when he may return to the civilization he knew before. Cast Away reunites star Hanks with director Robert Zemeckis, their first film together since 1994's Oscar-winning Forrest Gump. ~ Jason Clark, Rovi

Fred Smith
as Himself

Tommy Cresswell
as FedEx Anchor No. 2

News & Interviews for Cast Away

20 Years After Its Release, Cast Away Is More Relevant Than Ever
Rank Tom Hanks’ 10 Best Movies
Match the Tom Hanks Movie Review Quotes!

View All Cast Away News

Critic Reviews for Cast Away

Though Hanks comes across as blandly as ever, at least his solid performance shows he's up to carrying half a movie on his own, and Zemeckis' direction is at first as busily efficient as the protagonist.

Hanks's Everyman quality has never been more aptly utilized: He's the perfect stand-in for all of us who never made it to Eagle Scout.

Chuck has flashes of ingenuity that filled me with the thrill of discovery and invention, and stretches of failure that I felt just as acutely.

Cast Away isn't the first to recognize our modern need for primal tales, but it is among the most accomplished. It plugs straight into our unplugged fantasies.

Hanks conducts a master class in acting by showing a man losing his sense of himself in fractional gradations.

Hanks earned a well-deserved best actor Oscar nomination, carrying much of the action without talking to anyone but himself for a Wilson volleyball he finds in a washed-ashore Fed-X box.

Tom Hanks is the perfect actor for the role.

"Cast Away" is an exceptionally well-crafted exploration of the survival of the human spirit. It's a movie unafraid to consider the full complexity of life.

As melancholy as it is affirming, "Cast Away" tells a darkly comic, occasionally punishing parable about what happens when humans lose sight of humility in life's grand scheme - an interesting thematic twin to Tom Hanks' own "Joe vs. the Volcano."

Audience Reviews for Cast Away

So Tom Hanks plays a real go-getter who gets stuck on a desert island. Okay. Then what? Well the opening sequences are good, as he learns to feed himself, to survive, but the ultimate rationale for the whole piece is how he handles the idea that he might be there forever, and this Zemeckis decides to keep off camera. Why? I don't know. It simply skips that part. We rejoin our hero as, reenergized, he decides to risk it all to save himself. But it could've been a better film, an examination of why we choose life (as opposed to life simply choosing us). I had the feeling Zemeckis kept the core of the piece to himself. Still, it's watchable, if anticlimactic.

'Cast Away'. Tragedy and euphoria on the smallest and biggest of scales. It's all relative when you're alone for an age on an island! Tom Hanks turns in an amazing performance. The writing and direction is spot on too.