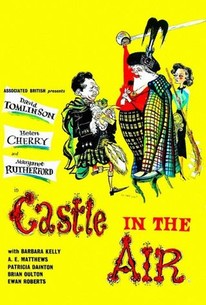 Castle in the Air Photos

Most of this hectic British comedy takes place in an ancient Scottish castle. The British National Coal Board, following a real-life policy established in the 1940s, wants to annex the castle as a group home for the local miners and their families. Wealthy, much-married American Mrs. Clodfelter Dunne (Barbara Kelly) wants to claim the castle--and its owner, the Earl of Locharne (David Tomlinson)--for herself. Meanwhile, eccentric boarder Miss Nicholson (Margaret Rutherford) is possessed with the notion that the Earl is actually the rightful King of Scotland. The film's deus-ex-machina is a beautiful ghost, played by Patricia Dainton. With all this going on, it is easy to ignore the antiseptic romantic subplot involving Tomlinson and Helen Cherry. Castles in the Air was based on the popular stage play by Alan Melville. ~ Hal Erickson, Rovi

David Tomlinson
as Earl of Locharne

Critic Reviews for Castle in the Air

There are no critic reviews yet for Castle in the Air. Keep checking Rotten Tomatoes for updates!

There are no featured reviews for Castle in the Air at this time.

Castle in the Air Quotes