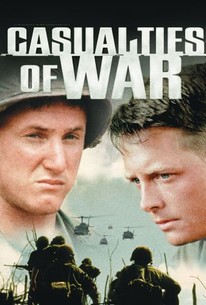 Casualties of War was based on a New Yorker article by Daniel Lang. This, in turn, was inspired by a true incident which illustrated the dehumanizing aspects of the Vietnam experience. Michael J. Fox plays Eriksson, a member of an American squadron stationed in the deepest jungles of Southeast Asia. Sean Penn co-stars as Meserve, the squadron sergeant, who vows revenge after his best friend is killed. He orders his men to invade a village and "requisition" a young Vietnamese girl (Thuy Thu Lee), who is repeatedly tied, gagged and gang-raped. The horrified Eriksson refuses to participate in these atrocities, and he does his best to console the girl and to attempt to free her. Before this can happen, however, Meserve orders another man to kill the girl. Once he returns to camp, Eriksson attempts to file a report on the tragedy and to bring Meserve and the others to justice, but he is stonewalled by the brass and threatened with death by his fellow soldiers. Eventually Meserve and his co-conspirators are jailed for their crimes, but Eriksson can never forget his "compliance" in the incident by failing to save the girl. The script is by well-known playwright David Rabe.

Niran Sattar
as VC in Tunnel

News & Interviews for Casualties of War

View All Casualties of War News

Critic Reviews for Casualties of War

Casualties of War is the strongest, the simplest and the most painful of all the Vietnam movies because it isn't about how terrible it is not to understand what's going on around us -- it's about the agony of seeing terrible things too clearly.

Michael J. Fox is a revelation as the mouse that roared, whilst the score, the direction, and the rest of the cast turn a risky film into a solid addition to the Nam canon.

There's a moral charge to the action, but it's also swooningly exciting, coldly scary. Every friend may be an enemy, every innocent a traitor.

De Palma uses his consummate filmmaking skill to craft a reflection of his own grave sorrow about the Vietnam era.

Casualties of War is dull.

A grim and sobering work.

Does Vietnam have a geographical place, a national history, a culture, or a political future? Not really, for as we are reassured at the end of Brian De Palma's military slasher film, Casualties of War, Vietnam was after all only a "bad dream."

Speaking to our near-masochistic desire to revisit works in the hope that we can reverse the tragic outcome, Casualties of War perhaps transcends the very label of "war film."

The strong conclusion ensures that the film ends on a somewhat powerful note...

Makes us look at the mistaken Vietnam War as something that's dehumanizing.

Audience Reviews for Casualties of War

Based on actual events, this is a gripping examination of of a squad of soldiers who find themselves heavily embroiled in the moral quagmire of the Vietnam War. ed PFC Eriksson (Michael J. Fox) is an idyllic soldier new to the territory. He's soldiering with a squad of hardened men lead by the young but volatile Sgt. Tony Meserve (Sean Penn). After Meserve's best friend is killed, he vows revenge. Part of that process involves going to a village to kidnap a girl whom he belives is allied with the VC. His intention is to use her as "mobile R & R". Eriksson is horrified by this, but is outvoted, and looks on in horror and disgust as his squad (which includes debuts from John C. Reilly and John Leguizamo) brutally treats, rapes, then kills the girl. Despite risk of severe retaliation, and the indifference of his superiors (Ving Rhames and Dale Dye), Eriksson is determined to bring his fellow soldiers to justice. It seems inevitable that most if not all of the New Hollywood directors have made a war film, specifically one concerning Vietnam. This is Brian DePalma's entry in that category, and, it's quite good. It lacks a lot of his overt cynicism and gimmickry, focusing instead on heavy themes and character. Don't get me wrong, there's some great camera work, a wonderful look, and a strong score from Ennio Morricone, but this is mostly a showcase from DePalma playing it straight. There's nothing wrong with that either, because it's a pretty solid film. Yes, the film does get a little too sappy and sentimental towards the end, maybe a bit too feel good, bt it's mostly earned. Also, Fox is quite compelling and convincing, but I think he was perhaps too pure of a character. He's still good though, and really sympathetic. As good as he is though, he of course gets overshadowed by Sean Penn. Penn, as expected is fiercely intense, unhinged, and memorable. The aforementioned supporters are all pretty decent, too, giving hints of greater things to come. All in all, this is a really good film, and you should check it out. Yeah, it is flawed, but even then it's still pretty worthwhile.

Imagine A Clockwork Orange in vietnam, a shocking and tense war film. The most serious picture with Michael J. Fox. Casualties of War is also one of the best DePalma's moments.

Based on an actual incident during the Vietnam War, Casualties Of War is the shocking true story of four men who raped and murdered a Vietnamese girl. The film stars Michael J. Fox as Pfc Eriksson, the new recruit in Vietnam who witnesses the crime. Sean Penn stars as Sgt Meserve, the antagonist of the film and he gives one brutal performance here, I thought it was very chilling. Eriksson seeks to report the matter to his superiors, but none seem to care. Meanwhile Meserve orders one of the men who participated in the rape to kill Eriksson, but he escapes. Eriksson soon talks about the incident to a superior who is also a priest. The military takes action against the men, and they get a harsh sentence. This is a film that came out during the height of the Vietnam war film craze of the late 80's, but it seems to be forgotten. Casualties Of War is a good film, but it's definitely one of the weaker Vietnam War films to come out in this period. The film is no Platoon or Full Metal Jacket. The film started off very promising, but it kind of ended flat. The film feels almost unfinished and I think the ending could have been better, sure the criminals get punished, but the filmmakers could have done something a bit more solid than the ending on the bus. However the film aside from the ending has a two things going for it, Ennio Morricone's solid score and Brian Depalma's near flawless directing. Casualties Of War is a good war drama, but its the best out there, at times the script feels strained and it seems that they tried to make nearly every seen very overly sentimental, more than they needed to be. But this is still a film worth watch, hard to watch, but good nonetheless. The biggest problem with the film is that it tries too hard to imitating the Vietnam War film greats by overdoing the drama. A good film, but not one of the best Vietnam War films.