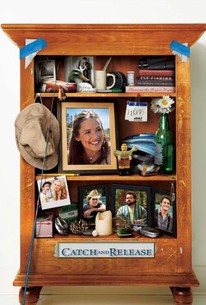 After losing her husband in a tragic accident that occurred during his bachelor party, a would-be widow (Jennifer Garner) struggles to sort through the many secrets he kept from her as she adjusts to her new life. Erin Brockovich screenwriter Susannah Grant makes her directorial debut with a romantic comedy starring Juliette Lewis, Kevin Smith, and Timothy Olyphant.

Daniel A. Parker
as Deadhead Singer

John B. Destry
as Paint Salesman

News & Interviews for Catch and Release

View All Catch and Release News

Critic Reviews for Catch and Release

Release yourself from boredom by giving it a miss.

Juliette Lewis helps break the monotony with a sparkling turn as a ditsy skeleton in the dead fiancé's closet and Kevin Smith spouts a few good zingers as the slacker housemate. Sadly it's not enough to catch and keep hold of your interest.

A film with a fishing metaphor for a title should have come with sharper hooks.

I was pleasantly surprised.

The film slowly and credibly builds a bridge between two diametrically opposite individuals. Call it another little triumph.

A story of self-discovery Catch and Release is ... well it's horribly, horribly dull is what it is. It's like an entire season of a mediocre primetime soap opera squeezed into a couple of hours.

...harbours a secret crush on Gray but, hey, so does everybody, since Gray has fairies and butterflies flying out of her vagina.

Catch and Release will not cause Ben Affleck any husband-envy. It's a harmless romantic comedy that will garner Garner no awards and middling success at the box office.

Suffice it to say that when the best thing you can say about a movie is the soundtrack was decent (catch the old Lemonheads tune in the beginning), it's not worth the trip to the theater.

By the conclusion of the film, Catch and Release transformed itself from a risk-taking romantic comedy with a darkly humorous lining into a stereotypically syrupy outing...

Audience Reviews for Catch and Release

A woman whose fiancee recently died learns that he had a child with another woman. I only rented this film to see Kevin Smith, and he wasn't bad, even capable of handling a heavy, dramatic scene. Jennifer Garner was also occasionally good. But nothing can rescue the story. The bottom line is that I have absolutely no idea what draws Gray to Fritz, and if I see one more film in which a woman slaps a man, then is thwarted when she tries to slap him twice more with alternating hands before he pins her against a wall and they begin making out, I'm going to try to get slapped more often. And there's an oppressive unevenness to the film made worse by the mix CD of indie songs that seem to be squeezed into the film. Overall, Catch and Release is not a good film because the motivations of the main characters are more mysterious than the reason that nobody ever kisses after getting hit.

It was an ok film!

After reading Kevin Smith's Diary, "My Boring Ass Life" I felt compelled to watch this movie as he chronicles some of his time making it (for which he took some guff from the studios for revealing too much). Smith was fun to watch as he was primarily playing himself. Garner, a true natural beauty who I defy you not to love. The movie...not so much. I was almost angry watching the character inconsistencies, the obvious plot trends, the cliches. The start was very heartfelt and had promise, but it quickly devolved into just so much tripe. I really do not know what we were watching with Jennifer Garner's character, "Gray." She turns into something wholly different from the beginning of the film to the end and even while the metamorphosis may have been part of the journey and process the moves are so jumpy and without precipitant as well as by a route that is so very nonsensical that the destination makes no sense and just leaves one with no idea what any of the characters are about. None of the character decisions make any sense in the context of development and are totally devoid of discernable motive. The backdrop is spectacular (Vancouver pretending to be Colorado). Some of the performances were memorable (primarily Smith and Garner), but I simply cannot recommend this movie as anything more than, "fair" to "unsatisfying."