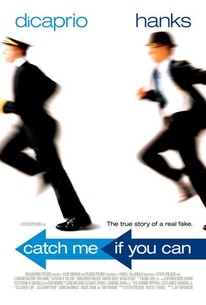 Catch Me If You Can Videos

Catch Me If You Can Photos

Based on a true story, Frank W. Abagnale was employed as a doctor, a lawyer, and as a co-pilot for a major airline company-all before reaching his 21st birthday. A successful con artist and master of deception, Frank is also a brilliant forger, whose skill at check fraud has netted him millions of dollars in stolen funds--much to the chagrin of the authorities. FBI Agent Carl Hanratty has made it his prime mission to capture him and bring him to justice, however Frank is always one step ahead of Carl, baiting him to continue the chase.

Kelly McNair
as Girl No. 1

Jonathan Danker
as Student No. 1

Kitty Carlisle Hart
as Herself

Jack Knight
as Man No. 3

Joe Garagiola
as Himself

Kittie Carlisle Hart
as Herself

News & Interviews for Catch Me If You Can

View All Catch Me If You Can News

Critic Reviews for Catch Me If You Can

This is the director's most likeable film in ages, even if it's insubstantial, overlong and, frankly, a touch redundant.

Arguably the most gifted young actor of his generation, Leonardo DiCaprio has definitely been a victim of his own success. Leo bashing was all the rage there for a while after his monster smash Titanic.

Hanratty isn't a strictly factual character - he's called O'Reilly in the book, not his real name either - but the performance Hanks gives makes you wish he were. Abagnale isn't strictly factual either, but DiCaprio makes him an attractive counterfeit.

This is a delectable film indeed.

Catch Me If You Can is probably one of the best films amongst Spielberg's minor titles, saying more positively about the man's talent than it says anything negatively about the film.

The film is amusing. Legitimately so. This is perhaps as anti-establishment as one can expect Spielberg to be ...

The lighthearted tone and smart pacing allow for unwavering entertainment, plenty of natural humor, and Spielberg's knack for sympathizing with antiheroes.

Catch Me If You Can, aided by strong performances, makes for an entertaining addition into the Steven Spielberg filmography.

What can I say, but catch it. Catch it now. Catch it again. By hook or by crook, just catch, Catch Me If You Can.

Long and complex, the agility with which Spielberg directs the story of Frank Abagnale performed with incredible naturalness, promptness and charisma by Leonardo DiCaprio. [Full Review in Spanish]

Audience Reviews for Catch Me If You Can

Leo DiCaprio, Tom Hanks and Christopher Walken in what may be Spielberg's best film about a young con artist who bamboozles millions by what might be best termed our willingness to be bamboozled. Without much of a hook what the work hangs on is the inner child in us all, whoever we are, who simply wants to be loved. Chris Walken steals the film as the father, not so perfect, flawed to the nth degree and yet loving. Hanks is the stepdad, uncomfortable in his role and yet trying the best he can, and DiCaprio is the gifted child somehow left behind, wondering how it is that he got that way. A work to rip your heart out.

Based on a true story, Frank (Leo) a 17 year old runs away from home when his parents get divorced. To survive he starts to forge cheques and takes on false identities as a pilot, doctor and lawyer. Frank is chased by the FBI Carl (Tom) all across America and Europe. Great cast including Leonardo DiCaprio, Christopher Walken, Martin Sheen and Amy Adams. Directed by Steven Spielberg.

Great story. Amazing that someone would be ballsy enough to actually try the various occupations Frank did.

Catch Me If You Can Quotes