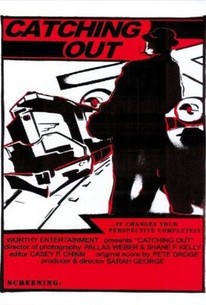 Many may believe that the hobo is a relic of a bygone era, a mere stereotype popularized by depression-era comedies, and it's this preconception director Sarah George aims to shatter with her documentary Catching Out. Its title derived from the slang term for hopping a ride on a train, the film chronicles the lives of hobos continuing to catch rides on trains all over the United States. George herself hops some trains, encountering such individuals as Jessica, an ever-transient young woman, and Lee, an environmentalist and avid camper.

Critic Reviews for Catching Out

Ultimately, the film is as numbingly boring as, well, a lengthy train ride during which there's nothing to do but look out the window.

When focusing on its four main subjects, Catching Out is an absorbing, picturesque group portrait.

George's portrait of hobo lives gets stuck in self-absorption.

Vicariously relays the intoxicating fusion of railway rhythms, the poetic thoughts of these nomadic philosophers, and the continuous enchanting flow of majestic landscapes that the most elaborate hi-tech special effects would find difficult to match.

In letting her subjects speak for themselves, George does a good job of exploring the lure of the road, or in this case the rails.

It's a unique and fascinating film.

A ride worth taking, although the cavalier attitude by the film's subjects regarding their illegal actions is rather disturbing.

Audience Reviews for Catching Out

There are no featured audience reviews yet. Click the link below to see what others say about Catching Out!