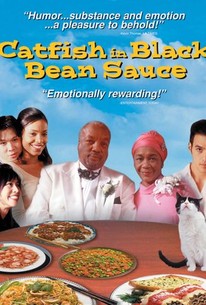 In Catfish In Black Bean Sauce, Paul Winfield and Mary Alice play an African-American couple who in the 1970's adopted two Vietnamese children, a brother and sister. 20 years on, the two kids have grown to adulthood; Dwayne (Chi Muoi Lo) has absorbed a great deal of black culture from his adopted parents and is engaged to an attractive African-American woman (Sanaa Lathan). His sister (Lauren Tom), however, feels more comfortable with Asian cultural paths and has married an older Asian man (Tzi Ma). The siblings have recently come in contact with their birth mother (Kieu Chinh), and are awaiting her first visit to the United States, which causes no small amount of personal, cultural and familial clashes. Catfish In Black Bean Sauce is the feature debut from writer/director Chi Muoi Lo, who also plays Dwane; it was a prize winner at the 1999 WorldFest/Houston Film Festival.

Kevin D'Arcy
as Guard No. 1

Andre Rosey Brown
as Guard No. 2

Ho Lo
as Man at Airport

Vien Hong
as Transvestite
View All

Photo Gallery Update: "The Da Vinci Code"
Critical Consensus: "Something" Ain’t Nothing, "Call" Is Not Screened

Here's a first draft for a movie that could have been extraordinary. The story materials are rich and promising, but the film is a study in clumsy construction, dead-end scenes, murky motivation and unneeded complications.

Initially creates a delightfully diverse world in which no one is really as they seem to appear.

By turns whimsical and moving, Catfish touches on deeply emotional issues with refreshing and startling honesty...

This bold film is one of the first to try to deal with the complications of molding a fusion culture comprised of so many disparate elements.

A great movie! One of my favorites. Love it.