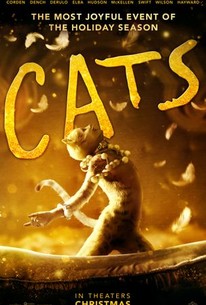 Critics Consensus: Despite its fur-midable cast, this Cats adaptation is a clawful mistake that will leave most viewers begging to be put out of their mew-sery.

Critics Consensus: Despite its fur-midable cast, this Cats adaptation is a clawful mistake that will leave most viewers begging to be put out of their mew-sery.

Critic Consensus: Despite its fur-midable cast, this Cats adaptation is a clawful mistake that will leave most viewers begging to be put out of their mew-sery.

Universal Pictures and Working Title's Cats is a most-unexpected film adaptation of Andrew Lloyd Webber's beloved smash musical "Cats" and the poems from "Old Possum's Book of Practical Cats," by T.S. Eliot. Oscar (R)-winning director Tom Hooper (The King's Speech, Les Misérables, The Danish Girl) brings astonishing new technology to transform his cast members. Acclaimed casting director Lucy Bevan is casting the film adaptation. The epic will be produced by Hooper and Working Title's Tim Bevan and Eric Fellner, as well as fellow Les Misérables producer Debra Hayward-who brought the idea to Working Title. CATS will be produced by Working Title Films in association with Monumental Pictures and The Really Useful Group and executive produced by three-time Oscar (R) winner Steven Spielberg, Lloyd Webber and Angela Morrison. Hooper and Lee Hall (Billy Elliott, War Horse) have adapted the story for the screen. One of the longest-running shows in West End and Broadway history, "Cats" received its world premiere at the New London Theatre in 1981-where it played for 21 record-breaking years and almost 9,000 performances. The groundbreaking production based on T.S. Eliot's "Old Possum's Book of Practical Cats" was the winner of the Olivier and Evening Standard Awards for Best Musical. In 1983 the Broadway production became the recipient of s

Steven McRae
as Skimbleshanks
View All

The film is flat, without any of the camp, kitsch high energy that characterised the stage show, but its wrongness is never less than mesmerising.

You can't believe what you're looking at because it's so hideous to behold.

There's a digital veneer of horror and farce and glazed looks, and it just doesn't work, it's not sensibly thought about.

While the performances are brilliant and the songs are great, the story isn't as strong as it could be.

However amazing the trickery may be... the characters fall awkwardly into the crack between animal and human, and the plot, which requires them to sing and dance in competition with one another, is scarcely more convincing.

I finally understand that one episode of Unbreakable Kimmy Schmidt.

No disrespect to people who love this musical, this is the worst movie of the year... next year too.

...unable to claw itself away from its detracting visuals.

I want to tell you I at least had fun... but this movie is also so horrible it doesn't even earn the status to make fun of magicians.

Watching the film version of Cats is truly mystifying, in neither a completely bad nor completely good way. Fans of the theater production may enjoy seeing their favorite songs or characters again, but there's little to recommend for anyone else.

With actors who appear to have been put through the full-body Snapchat cat filter, a Ziegfeld Follies-style chorus line of dancing cockroaches and felines with human hands and feet, you'll wonder if the theatre popcorn is laced with catnip.

There are no featured reviews for Cats at this time.