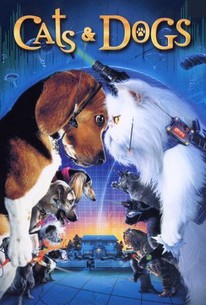 Critics Consensus: A great concept, but the movie fails to develop the characters and some of the jokes are hit-or-miss.

Critics Consensus: A great concept, but the movie fails to develop the characters and some of the jokes are hit-or-miss.

Critic Consensus: A great concept, but the movie fails to develop the characters and some of the jokes are hit-or-miss.

This talking-animal action comedy from Lawrence Guterman, the co-director of Antz (1998), follows on the heels of the Babe and Dr. Dolittle films. Unknown to humans, a secret war has been raging between cats and dogs for eons, but a fragile truce has long held the order of the animal kingdom in place. Now the balance of power has tipped, as a researcher, Professor Brody (Jeff Goldblum), is about to invent a vaccine that will erase all human allergies to dogs. This is too much for the autocratic Mr. Tinkles (Sean Hayes), a white Persian kitty bent on world domination. The Brody home becomes ground zero for the renewed conflict between feline and canine, with a young Beagle puppy named Lou (Tobey Maguire) caught in the middle as the new point man for his species' cause. Cats and Dogs co-stars Elizabeth Perkins and Alexander Pollock, as well as the vocal talents of Susan Sarandon, Alec Baldwin, Jon Lovitz, Michael Clarke Duncan, and Joe Pantoliano.

Salome Jens
as Collie at HQ

Plenty of heart and hijinks mixed with litter box humor.

Unlike the Babe films, the plot here is so thin that there's almost nothing for the effects and jokes to cling to.

Falls victim to a common pitfall of special-effects movies: The technology takes precedent over the characters and story.

Cats and Dogs may be playing the same game as Spy Kids, but it isn't in the same league. What it does have is a comparable level of rollicking energy…

A surprisingly witty and sophisticated spy movie spoof that will tickle adult pet lovers and still capture kids 6 and older with its boy-and- his-dog love story and pet slapstick.

Succeeds both as a parody of the spy genre, and in stretching the boundaries of what you believe is possible.

Cats & Dogs is meant to be entertaining and for the most part, is. Ignore the humans, embrace the animals and watch the fur, and fun, fly! And fear not - no animals were harmed in the making of this movie.

...juvenile caricature the whole way, so adults had better beware.

Cats & Dogs is, at its absolute peak, faintly amusing.

Perfectly suited to delight its target audience of 8-year-olds, leaving the rest of us ready to turn off the TV and turn to our own pets for more genuine laughs.

Mr Tinkles has to endure the humiliation of being dressed up in ridiculous outfits by his eccentric owner, meaning that he gets to deliver lines such as "EVIL%u2026does NOT wear a BONNET!"

Those incredible animals steal the show here -- just like in 'Babe.'

Funny film about how cats and dogs behave. Cats want to rule. They want to make humans allergic to their dogs.

The film's concept is quite interesting and Im sure a lot of people would have loved the idea of it. But the film itself is a complete mess. The jokes aren't that great and are rather hit and miss for all the family including the children. There's no development into the character of both the humans and the pet animals.

This film is about the war against cats and dogs. Pros good action and spy parts. Cons Weak plot Bad acting Those cats are bad in this film.