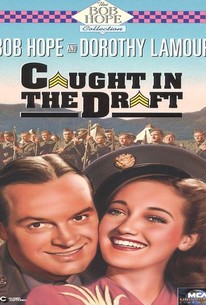 Bob Hope plays a famous movie star who does his best to avoid the pre-war draft, but ends up in uniform all the same. Hope marries Dorothy Lamour, the daughter of Army colonel Clarence Kolb, in hopes that this union will help him sidestep military service. Stuck in boot camp, Hope is a class-A screw-up until redeeming himself during a sham battle--though his "heroic" commandeering of a tank began as yet another boo-boo. Still not entirely certain that Hope could carry a film by himself, Paramount teamed him with Eddie Bracken and Lynne Overman--a sort of Abbott and Costello plus One. Despite the efforts to make Bob Hope part of an ensemble, it is clear from the first frame to the last who is truly the star of Caught in the Draft.

Andrew Tombes
as Justice of the Peace

Critic Reviews for Caught in the Draft

From Abbott & Costello and Martin & Lewis to Bill Murray and (shudder) Pauly Shore, it seems a rite of passage for popular comedians from all eras to tackle a military comedy.

Released just months prior to the US entry into WWII, this comedy offers Bob Hope one of his funniest roles.

Audience Reviews for Caught in the Draft

There are no featured audience reviews yet. Click the link below to see what others say about Caught in the Draft!

Caught in the Draft Quotes