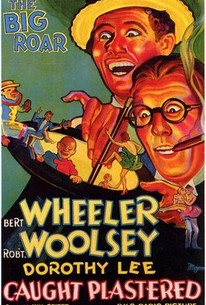 After briefly splitting for a brace of unsuccessful solo ventures, the comedy team of Bert Wheeler and Robert Woolsey were reunited in one of their best vehicles, Caught Plastered. Bert and Bob are cast as itinerant vaudevillians Tommy and Egbert, who find themselves stranded in a small Midwestern town. Here they befriend Mrs. Talley (Lucy Beaumont), the sweet old proprietor of a near-bankrupt drugstore. To prevent slimy medicinal wholesaler Harry Waters (Jason Robards Sr.) from buying the store at a ridiculously low sum, the boys decide to help Mrs. Talley drum up business. They set up a soda fountain, novelties counter, book shop and even a radio station ("Y.M.I Broadcasting") in the store, and soon business is booming. But Waters, who secretly moonlights as a bootlegger, sabotages the enterprise by spiking the store's lemon syrup with booze. Things look bad when Tommy's sweetheart Peggy (Dorothy Lee) -- who happens to be the daughter of the police chief -- gets roaring drunk on the "syrup," but our heroes manage to save Mrs. Talley's store and expose Waters as a crook in one fell swoop. Though Caught Plastered has the usual quota of corny Wheeler-and-Woolsey repartee, it also has more "heart" than usual, especially the wonderful scene wherein the boys cheer up Mrs. Talley by performing their gloriously awful vaudeville act. The film re-established the team's box-office popularity, ending up as RKO Radio's biggest moneymaker of 1931.

Charles B. Middleton
as Flint

Jim Farley
as Clancy
View All

This is the most pleasing Bert Wheeler and Robert Woolsey comedy that I have caught.

There are no featured reviews for Caught Plastered at this time.