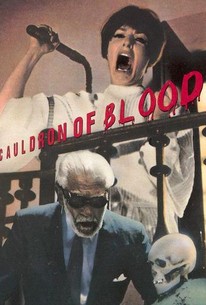 This Spanish horror melodrama is one of the final film appearances of Boris Karloff, who plays a blind, wheelchair-bound sculptor who uses real human skeletons as armatures for his eerie, life-sized works. Despite his artistic success, he is unaware of how these foundations are actually being procured. It is only after he becomes the prime suspect in the disappearance and murder of several artist's models that we are led to discover the real culprit: his demented, drug-addict wife (Viveca Lindfors), who has been playing her connections with a white-slavery operation (don't ask) to provide her husband with the skeletal resources needed to maintain his artistic success, as well as a seemingly foolproof method of hiding bodies. Karloff's screen-time is limited due to his advanced illness (the film was released after his death), with the bulk of the plot revolving around one young model's personal investigations into the disappearances of her peers. Also known as Cauldron of Blood, The Corpse Collectors and Death Comes from the Dark.

Eduardo Coutelen
as Domingo
View All

Critic Reviews for Cauldron of Blood

There are no critic reviews yet for Cauldron of Blood. Keep checking Rotten Tomatoes for updates!

Audience Reviews for Cauldron of Blood

There are no featured audience reviews yet. Click the link below to see what others say about Cauldron of Blood!