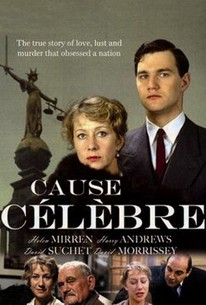 When the ailing husband of an adulterous wife is discovered bludgeoned to death and suspicions fall on the older woman's young lover, the newly widowed woman claims that it was she who was solely responsible for the death despite evidence that points to the contrary in this dramatic account of true-life 1935 trial that shocked all of England. Though notable evidence and strong suspicion suggests that the murder may have been of crime of passion perpetrated by the jealous lover only half her age, Alma Rattenbury (Helen Mirren) confesses to the murder of her husband and is soon brought to trial. Despite the fact that Alma is already being deemed guilty by the general public for her adulterous indiscretion alone, her lawyer, star attorney T.J. O'Connor (David Suchet), remains convinced that his client will eventually be cleared of all charges. ~ Jason Buchanan, Rovi

Critic Reviews for Cause Célèbre

There are no critic reviews yet for Cause Célèbre. Keep checking Rotten Tomatoes for updates!

There are no featured reviews for Cause Célèbre at this time.