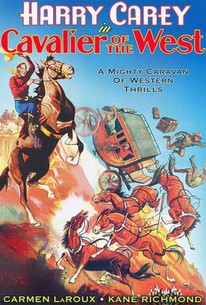 The first of four low-budget Westerns that veteran cowboy star Harry Carey made for poverty row company Artclass Pictures, this film was a sometimes thoughtful, mostly heavy-handed story of a cavalry captain attempting to keep the peace between Indians and settlers. A gang of whites are robbing the local tribe of its gold shipments and framing the Indians in a cattle rustling scheme. The mastermind behind the scheme, as Captain Carey soon realizes, is Lee Burgess (Ted Adams), foreman of the Fernandez Rancho. Like John Wayne would in his later years, Carey sensibly left the necessary romantic interludes to younger cast-members, in this case Kane Richmond, as Carey's handsome younger brother, and Carmen la Roux, as Dolores Fernandez. Five-year-old Elena Verdugo -- later a popular Universal starlet and, later still, Nurse Lopez on television's Marcus Welby, M.D. -- made her screen debut in this film.

Critic Reviews for Cavalier of the West

There are no critic reviews yet for Cavalier of the West. Keep checking Rotten Tomatoes for updates!

There are no featured reviews for Cavalier of the West at this time.

Cavalier of the West Quotes