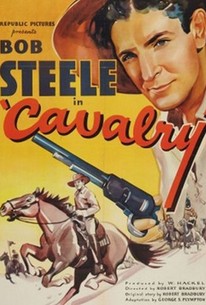 Bob Steele plays a Boy in Blue in the low-budget western Cavalry. The diminutive Steele leads his troopers against all manner of dangerous foes, all for the benefit of leading-lady Frances Grant. Naturally, Steele is also trying to avenge the murder of his father, just as he'd done in his previous 30 films. Steele's real-life father Robert Bradbury warmed the director's chair for Cavalry. Produced by A. W. Hackel's Spectrum Pictures, the film was distributed by Republic.

There are no critic reviews yet for Cavalry. Keep checking Rotten Tomatoes for updates!

There are no featured reviews for Cavalry at this time.