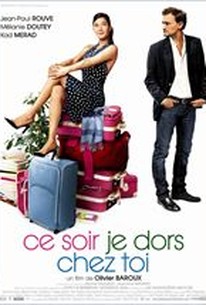 A man tries to figure out a way to keep his freedom and the woman he loves at the same time in this romantic comedy from France. Alex (Jean-Paul Rouve) feels as if he's sitting on top of the world -- he's enjoying a successful career as a writer, and he's in love with a beautiful woman, Laeticia (Melanie Doutey) who seems to be just as infatuated with him. But as Alex's romance with Melanie progresses, she gently but firmly insists on a more permanent relationship, and asks him to move in with her. Commitment-phobic Alex is convinced this is the first step towards marriage, and insists on keeping his own flat. Running out of excuses, Alex persuades his agent Jacques (Kad Merad) to feign depression and move in with him, but Laeticia isn't buying Alex's angel-of-mercy act and finally lays down the law -- either they move in together or she's going to leave him. Ce soir, je dors chez toi (aka Tonight I'll Sleep At Yours) also co-stars Helene Patarot, Rhiles Djarouane and Sarah Stern. ~ Mark Deming, Rovi

There are no critic reviews yet for Ce soir, je dors chez toi. Keep checking Rotten Tomatoes for updates!

There are no featured reviews for Ce soir, je dors chez toi at this time.