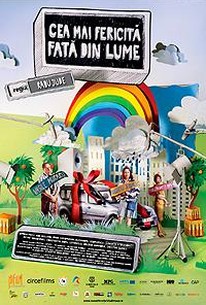 A youngster find her dreams coming true in ways that don't make her especially happy in this comedy from Romania. Delia (Andreea Bosneag) is a shy seventeen-year-old girl who has grown used to the idea of things not going her way. But Delia believes her luck may have changed when she wins a contest sponsored by a fruit juice company; her prize is a brand new car and a role in an upcoming television commercial. Delia sees a glorious future for herself in which she finishes high school and can drive off to college in an auto of her own, but her parents (Vasile Muraru and Violeta Haret Popa) have a different idea -- they plan to sell the car and use the cash for household needs. Delia isn't happy with this idea, but she isn't in a position to tell her folks what to do, which makes her less then enthusiastic about having to appear in the commercial, which must be completed before she can get the car. As the shooting day for the commercial stretches on and on, Delia finds herself becoming less important in the scheme of things with each passing hour, until she decides it's time to assert herself. Cea Mai Fericita Fata Din Lume (aka The Happiest Girl In The World) was the first feature film from writer and director Radu Jude.

Alexandru Georgescu
as The client

The film refuses to offer pat solutions, presumably in an effort to stimulate more constructive discussions among its audience.

A portrayal of family life, and a sly dig at both the filmmaking process and consumerism, this is a low key and utterly delightful little gem

A delightful film that finds a perfect balance between funny and sad as it depicts the strain of family relationships from the point of view of a teenage girl under pressure, making even fun of consumerism and the difficulties of shooting a film/commercial in the process.