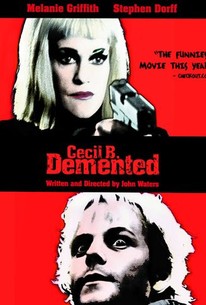 Critics Consensus: The idea behind John Waters' latest has much potential, but the movie ends up being too sloppy and underdeveloped in terms of script and direction. Also, by today's standards, it fails to shock.

Critics Consensus: The idea behind John Waters' latest has much potential, but the movie ends up being too sloppy and underdeveloped in terms of script and direction. Also, by today's standards, it fails to shock.

Critic Consensus: The idea behind John Waters' latest has much potential, but the movie ends up being too sloppy and underdeveloped in terms of script and direction. Also, by today's standards, it fails to shock.

Cecil B. DeMented goes behind the scenes with a group of obsessed cinema terrorists whose goal in life is to avenge the crass sins of commercial movie culture through acts of brazen filmmaking and vigilante outlaw cinema retribution. As the movie begins, the title character and his "Sprocket Holes" gang kidnap Honey Whitlock, a beloved Hollywood movie star visiting Baltimore for the premiere of her latest blockbuster. Once Whitlock is their prisoner, DeMented and his horny, tattooed crew immediately go into production on Raving Beauty, the ultimate underground movie in which Whitlock is forced to play the insane owner of a failed art theatre. Armed with lights, cameras, heavy artillery and courage to burn, DeMented and his guerrilla production team wreak havoc on the Baltimore film scene, hitting targets from the Maryland Film Commission to penetrating the high-security set of a major big-budget sequel.

Stephen Dorff
as Cecil B. Demented

Kevin Nealon
as Himself

Roseanne Barr
as Herself

Tyler Miller
as Fan a

Geoffrey I. Grissett
as Boy fan

Conrad Karlson
as The Psychiatrist

Jim Page
as Waiter in Kitchen

Critic Reviews for Cecil B. Demented

Where once Waters was brilliantly polluted, now he comes off diluted.

The problem with John Waters making a movie about the sorry state of commercial cinema is that his output is only a little more useful than what he's satirizing.

Ends up a sloppy exercise in irritating audiences instead of the sharp satire the story line promises.

Kevin Nealon, in his greatest role, plays himself as the star of Forrest Gump II. Impossible dreams abound...

Does this picture leap off the screen, or what? Yes, it leaps -- thanks to Melanie Griffith's eager participation in this act of revenge, Stephen Dorff's unbuttoned nuttiness...and Waters's knowing, caring intelligence about movie culture and its decline.

Waters satire of the film buff and the film industry is warranted and criminally under-appreciated...

Leave it to Waters to find a proper use for Mrs. Johnson-Banderas, whose natural, annoying shrillness is perfect.

As always, Waters works with an unmistakable affection for even his grubbiest characters.

Takes a potentially fun concept and basically goes nowhere with it.

Audience Reviews for Cecil B. Demented

At first, it seems like John Waters wants to make an audacious hate letter to mainstream cinema with some nice moments of brilliance, but then you realize his "revolutionaries" are a bunch of freaking tards and the film gets too over-the-top and all over the place to have a point.

De-ment-ed For-ev-er!!! I have no clue why people think this is not as good as Waters' other work. So vastly under-rated, waaaay better than Sunset Boulevard or Day of the Locust when it comes to a movie about movies.

I'll say it: I'm not a big John Waters fan. But I didn't hate this.