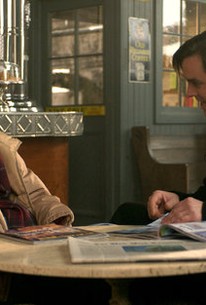 Celeste in the City Photos

A dowdy student journalist from Maine moves to Manhattan to find work, romance, and the perfect makeover in this made-for-cable movie. Celeste Blodgett (Majandra Delfino) arrives in New York ready to take on the world. But her hopes deflate when she learns that her supposedly fabulous new apartment is only a step up from a crack den -- and that her job at a prestigious newspaper is as a fact checker, not a reporter. Enter cousin Dana (Nicholas Brendon), who's shed both the closet and his clunky last name for a fabulous existence in the gay hot spot of Chelsea. Aided by a phalanx of similarly stylish friends (including one played by Deborah Gibson), Dana transforms Celeste from a frizzy-haired, bespectacled mouse to a glamorous vixen. Soon Celeste finds herself hanging out with a hunky, sexually ambiguous neighbor (Ethan Embry) and pursuing a romance with an ethically questionable editor (Michael Boisvert). Celeste in the City premiered Sunday, March 14, 2004. Buffy the Vampire Slayer star Brendon and Roswell actress Delfino join Charisma Carpenter (Buffy and Angel) and Holly Marie Combs (Charmed) in the ranks of WB network alumni who have found work on the ABC Family channel.

Critic Reviews for Celeste in the City

There are no critic reviews yet for Celeste in the City. Keep checking Rotten Tomatoes for updates!

There are no featured reviews for Celeste in the City at this time.

Celeste in the City Quotes