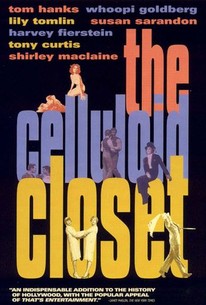 Critics Consensus: The Celluloid Closet takes a thought-provoking look at the decades of omission and misrepresentation endured by the gay community in mainstream cinema.

Critics Consensus: The Celluloid Closet takes a thought-provoking look at the decades of omission and misrepresentation endured by the gay community in mainstream cinema.

Critic Consensus: The Celluloid Closet takes a thought-provoking look at the decades of omission and misrepresentation endured by the gay community in mainstream cinema.

Documentary directors Rob Epstein and Jeffrey Friedman, already well-established for bringing gay issues to a mainstream film audience, examined the representation of homosexuality in the film industry itself in this absorbing study. Based on a 1981 book by Vito Russo and narrated by Lily Tomlin, the film states upfront that in one hundred years of cinema history, homosexuality has rarely been acknowledged, and only then for laughs, pity, or fear. As the film continues, it details the prevailing trends in the depiction of gays during each decade, showing how the visibility of homosexuals began to increase and evolve. Interviews with Tom Hanks, Susan Sarandon, Gore Vidal, and Harvey Fierstein, among others, are notable additions to this illuminating and entertaining feature.

Critic Reviews for The Celluloid Closet

"The Celluloid Closet" goes all the way back to the birth of cinema, to an experimental Thomas Edison short of two men dancing, to trace the odd, funny, sad and disgraceful history of homosexual iconography on film.

An immensely entertaining, galloping reflection on screen perceptions of lesbians and gay men, from the humorous to the heinous to the heartening.

A witty, touching study of Hollywood's (mostly on screen) treatment of homosexuality.

Celebrity interviewees and glossy graphics further turn this into a colorful overview with the popular appeal of a "That's Entertainment!" and with an even more interestingly gay agenda than the history of Hollywood musical comedy.

It's interesting to see how gay and lesbian themes began to be treated openly in films, but it's fascinating to see how -- earlier -- those themes were used subtextually in films that make no overt reference to the real subject.

This intelligent, fascinating film - based on the book by Vito Russo - is well worth a watch and is stuffed full of clips and contributions from stars, directors, screenwriters and academics.

A fascinating account of how Hollywood has dealt with homosexuals and homosexuality through its history.

Opening the door of the celluloid closet reveals a shifting kaleidoscope that underlines just how influential, for good or bad, the movies can be.

How ironic that a movie about the dangers of the closet would so confine one's freedom of interpretation.

Instead of an angry diatribe against Hollywood, the film shrewdly opts for a wity, often campy commentary by gay figures (Gore Vidal), directors (Wyler) and actors (Tom Hanks) who shed light on the context in which these films were made and viewed.

It's engrossing, brings a healthy sense of humor to the discussion, and enlightening without being bludgeoning.

Audience Reviews for The Celluloid Closet

A decent historical reflection, if not somewhat self-indulgent.

"It's amazing how, if you're a gay audience and you're accustomed to crumbs, how you will watch an entire movie just to see someone wear an outfit that you think means that they are a homosexual. The whole movie may be a dud but you are just sitting there waiting for Joan Crawford to put on her black cowboy shirt again." -Susie Bright An interesting documentary that enabled me to view some of my favorite films from a different perspective.

Great documentary on the history of Gay Film

A huge collection of clips from Hollywood's past, some subtle and some blatant in their homosexual themes. It is a touching and revealing look at gay subtext, which can sometimes be amusing when it becomes obvious. It drags a bit long, but is well put together.