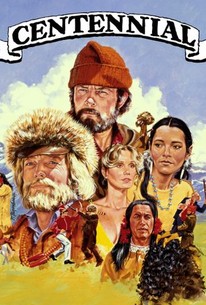 The longest (26-1/2 hours), most expensive ($25 million) and most complicated (four directors, five producers, five cinematographers, almost 100 speaking parts, several hundred extras) project made for television up to that time, Centennial was shown in two- and three-hour installments over a period of four months. An adaptation of James Michener's best-selling novel, it told the story of the settling of the American West by looking at the founding of the fictional town of Centennial, Colorado, from the settling of the area in the late 18th century to the present. Emmy-nominated for film editing and art direction, it boasts of sterling performances from Richard Chamberlain as frontiersman Alexander McKeag, Robert Conrad as the French-Canadian trapper Pasquinel, and a surprisingly powerful performance from former football star Alex Karras as compassionate but iron-willed immigrant farmer Hans Brumbaugh.

Even this many decades past the "present" of the story, the narrative and themes of Centennial - about respecting the land so that it respects us - are still as timely as ever.

There are no featured audience reviews yet. Click the link below to see what others say about Centennial!