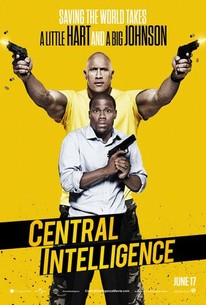 The story follows a one-time bullied geek, Bob, who grew up to be a lethal CIA agent, coming home for his high school reunion. Claiming to be on a top-secret case, he enlists the help of former "big man on campus," Calvin, now an accountant who misses his glory days. But before the staid numbers-cruncher realizes what he's getting into, it's too late to get out, as his increasingly unpredictable new friend drags him through a world of shoot-outs, double-crosses and espionage that could get them both killed in more ways than Calvin can count.

Thomas Kretschmann
as The Buyer, Kupiec

Slaine Jenkins
as Thugged Out

Overall, Central Intelligence isn't 48 Hours... However, if you enjoy Hart's stand-up comedy, and his other numerous flicks, then you'll probably enjoy this one as well.

Hart and Johnson got me to laugh, their antics just ridiculous enough to keep me entertained.

Dwayne Johnson and Kevin Hart give Central Intelligence all the charisma they can, and through their combined sheer force of will, this comedy works.

Summer blockbusters used to be reliably homophobic but, thanks to Johnson, this one's approach to love and lust seems genuinely new wave.

It's a plot that doesn't hold up under scrutiny, particularly in the scattershot climax, but the gag rate is so high that this doesn't matter as much as it should.

The artist formerly known as The Rock has long since proven that he has more natural acting chops than any other former muscleman-turned-thespian (sorry, Arnie), and he's absolutely riotous here.

Even as an excuse to provide opportunities for Johnson and Hart to play off of their disparities, the formulaic superspy gimmick is exhausting.

It should come as no surprise that director Rawson Marshall Thurber seriously plays up the vast differences in size and physique between Hart and Johnson.

Central Intelligence is very dumb, very weird, and plot-heavy to a fault, but it's also light-hearted, well-intentioned, and frequently very funny.

Hart and Johnson are playing variations of characters they've done before, and while they're hardly stretching themselves, they're doing what they do well.

Central Intelligence isn't groundbreaking, but it's a well-structured piece of fluff arranged around the right amount of substantive story beats.

A deeply unamusing bore of a movie.

Central Intelligence isn't a horrible movie. It coasts on the charm of its leads. Dwayne Johnson is eager, overzealous and blissfully unaware. He imagines this close personal friendship with Kevin Hart's character that was never really there. He's so naive he seems almost mentally challenged. Kevin Hart plays an exasperated, persnickety fuss-budget. The two are a mismatched pair. If you can appreciate the constant mugging from the two stars then you should cuddle up to the film's modest charms. Me? I was hoping for a bit more story than the threadbare plot that's served up here. For the record, it's some nonsense about selling critical U.S. satellite codes to terrorists. There's also some confusion as to whether Bob Stone is actually a good or a bad guy in the CIA but you'd have to be fast asleep not to figure that out. Yes it's totally predictable, but that's not the issue. I found their hijinks mildly amusing. I simply never laughed out loud at any point. It's so thoroughly generic. Directer and co-writer Rawson Marshall Thurber has done better work. I'd uphold DodgeBall: A True Underdog Story over this. What sets Central Intelligence apart is Wayne Johnson and Kevin Hart. I recommend this to very forgiving fans (and only fans) for whom these celebrities can do no wrong. fastfilmreviews.com

Benefiting from the incredible chemistry between Dwayne Johnson and Kevin Hart, Central Intelligence is the definition of a movie that makes you thank the cast for keeping you invested. While this film will never be worthy of the title "original," it definitely works very hard to get there. Setting up a few plot twists to come in the first act and paying every one of them off in the climax, you can see the care put into the script; However, that care falls by the wayside when the twists become slightly too convoluted. Most of them make sense, but others fall flat on their face, leaving no time to recuperate before the next one. Following Robert (Johnson) and Calvin (Hart), we pick up twenty years after the fact that Calvin had been voted most likely to succeed in high school and Robert being the fat kid getting picked on. Calvin grew up to be an accountant, while Robert became involved with the Central Intelligence Agency. Recruiting Calvin due to his skills, Robert unwillingly takes Calvin on as his partner in crime and action and hilarity ensues. Sort of. This film is being marketed as an action/comedy, but the trailers have been showing almost every comedic beat sadly. At it's core, this is an unlikely buddy action film with comedy sprinkled throughout, so do not be fooled by the trailers. I feel that I may have enjoyed the film slightly more if I knew that going in. Did I have fun watching Central Intelligence? Yes I did, but to a point. The funny things about the big twists in this film is that you never see them coming, but they are pretty dumb when they happen, which was surprisingly stupid in it's own right. The biggest problem this film has, is the fact that the script doesn't try hard enough, making the film seem like it is desperately hoping these two actors will pull through. Luckily, Central Intelligence pulls off that feat in style. The charisma on screen between these two is electric to say the least, mainly due to their incredibly large reputation they have accumulated over the years. It was nice to see Dwayne Johnson being able to play the comedic type over Kevin Hart. That was a great change of pace for Hollywood comedies such as this. Overall, Central Intelligence has a few pretty funny moments and the two leads are very enjoyable to watch together, but the film gets too muddled in it's own story, trying to be too clever for it's own good. With some solid comedy and some fun action sequences, I will warrant this film only to fans of either Dwayne Johnson or Kevin Hart. Most people seem to like these two, but if you don't this film will probably fall completely on it's face to you. Central Intelligence is a forgettably fun flick.