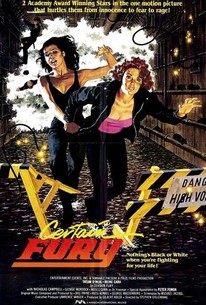 This Canadian exploitational actioner offers a remake of the Defiant Ones with a contemporary twist: this time the fugitives are women. The Caucasian girl is a prostitute who was picked up for vagrancy, while the other is a wealthy African-American woman who, with her boyfriend, is arrested for riding in a stolen Jaguar. While both girls are awaiting their incarceration, they get a chance to escape when two gun-toting hookers create a diversion. The two heroines flee and later find that they have been accused of the shootings. Now they must escape from both the cops and drug dealers.

William Traylor
as Policeman
View All

There are no critic reviews yet for Certain Fury. Keep checking Rotten Tomatoes for updates!

There are no featured audience reviews yet. Click the link below to see what others say about Certain Fury!