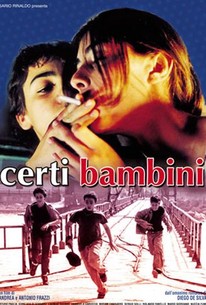 Rosario (Gianluca di Gennaro) is a 12-year-old living on the outskirts of Naples. As the film opens, he is preparing for a journey. He has a job to do. As he goes along his way, he remembers how he reached this point. He was taking care of his elderly grandmother (Nuccia Fumo), and Santino (Arturo Paglia) got him a job helping out at the local group home, where he met the beautiful 20-year-old Caterina (Miriam Candurro), who was pregnant and bitter. Rosario immediately fell for her, and Santino asked him why. "She's bitchy," he responded. Rosario spent his free time hanging out with his friends at "Las Vegas," the local game room. Casaluce (Sergio Solli), a low-level local mobster, would often send the boys to commit petty crimes for him. The boys were all a bit afraid of Casaluce, but Rosario never respected him, and noticed that there were other men who were much more powerful. When Rosario realized that Santino was involved with Caterina, his jealousy propelled him to make a dangerous alliance, and when tragedy struck, Rosario's bold viciousness got the attention of some powerful men. That was how he met Damiano (Carmine Recano), who taught him the facts of life, including how to treat women and how to use a gun. Certi Bambini, based on a novel by Diego de Silva, was directed by Andrea and Antonio Frazzi. The film was selected by the Film Society of Lincoln Center and the Museum of Modern Art for inclusion in the 2005 edition of New Directors/New Films.

Certi Bambini is all show.

Offering an excellent cast, narrative technique and cinematography, Certi bambini is the gripping story of a wasted youth in Naples, Italy.

There are no featured reviews for Certi Bambini at this time.