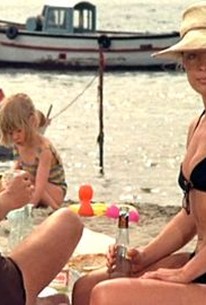 Claude Sautet's romantic drama César et Rosalie (Cesar and Rosalie) stars Romy Schneider as Rosalie, a beautiful young woman involved with successful businessman Cesar (Yves Montand). One day, Rosalie's former flame David (Sami Frey) appears and attempts to win her back. Cesar reacts with a jealous intensity never before seen by Rosalie, and because of that, she returns to David. She remains conflicted regarding her choice of partner, but eventually, one of the men does something which resolves the situation. César et Rosalie contains one of the first screen appearances of French actress Isabelle Huppert.

Critic Reviews for Cesar and Rosalie

The movie tells a love story of sorts, or a love-hate story, and even if it does lose its way toward the end it presents not one but two unusually good performances: by Montand... and by Romy Schneider.

César and Rosalie is a delightful watch all around.

I never thought of Yves Montand as a comic actor and funny man. But, here, he excels in his role as Cesar and I never would have guessed it.

Yves Montand's César is an intoxicating creation, a coarse charmer impossible not to fall in love with, despite 1972's chauvinistic undercurrents.

[Claude] Sautet tells his story with economy and ingenuity, letting his characters develop within the context of scenes that are themselves refreshingly unique.

The respected filmmaker delivers a clever and observant romantic drama that serves as a study on how the bourgeoisie operate behind middle-class conventions.

Audience Reviews for Cesar and Rosalie

[font=Century Gothic]"Cesar and Rosalie" starts out with comic book artist David(Sami Frey) returning to France after a five year absence.(One slight flaw of the movie is that the absence is never explained.) He has found out from a mutual acquaintance that his true love, Rosalie(Romy Schneider), has in the interim, married, had a child, divorced, and is now seriously involved with a very wealthy, older, but none too slick scrap dealer, Cesar(Yves Montand). David has been invited to the wedding of Rosalie's mother, thus complicating matters for everyone within a thirty-mile radius.[/font] [font=Century Gothic][/font] [font=Century Gothic]"Cesar and Rosalie" is a very clever movie about a love triangle that also has much to say about that everylasting battle between money and happiness. The movie is quite philosophical about when it is right to let go of a person, if at all and how none of us are possessions. Through Rosalie, we get a first hand view of a woman's battle for equality.(She is a translator, quite well educated and can handle Cesar's business affairs in his absence.) The audience has sympathy for all the characters which is always a good sign. The finale is especially well-done. The performances of the lead actors are all top-notch.[/font]