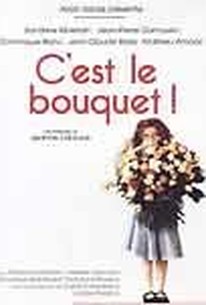 A strange phone call sets in motion a series of traumatic events in writer/director Jeanne Labrune's self-described "fantasy," C'est le Bouquet! Catherine (Sandrine Kiberlain of Alias Betty) and Raphaël (Jean-Pierre Darroussin of The Town Is Quiet) seem a reasonably happy middle-class Parisian couple until early one morning, when an old acquaintance, Emmanuel Kirsch (co-writer and one-time Godard collaborator Richard Debuisne) calls Catherine out of the blue and asks how much she got for a piece of real estate she sold 15 years earlier. This lapse of etiquette leads to an argument between Catherine and Raphaël that causes Raphaël to question the way he lives his life. That day, he goes to work and insults his pugnacious, blindly acquisitive stock-trader boss, Stéphane (Mathieu Amalric), who promptly fires him. Raphaël goes out and discusses his self-loathing with a sympathetic and amorous co-worker, Edith (Dominique Blanc). Meanwhile, Emmanuel, by way of apology, sends a bouquet to Catherine, which is misinterpreted by the couple's nosy neighbors, Antoine (Maurice Bénichou) and Alice (Hélène Lapiower), as a romantic gesture. They decide to steal Emmanuel's card so that Raphaël won't know who the flowers are from. Naturally, this only complicates the situation further. When Catherine and Raphaël arrange to meet at a local Chinese restaurant, Catherine can't find the place, and asks Robert (Jean-Claude Brialy) for directions, which leads to an argument when Robert, a playwright who also happens to be Emmanuel's neighbor, makes what Catherine thinks is a racially insensitive comment. At the restaurant, Raphaël tells Catherine about the job, and the couple contemplate what it will be like to be poor. Blanc was nominated for a César for Best Supporting Actress. C'est le Bouquet! was shown at Lincoln Center in New York as part of their 2003 Rendez-Vous with French Cinema. ~ Josh Ralske, Rovi

There are no critic reviews yet for C'est le Bouquet. Keep checking Rotten Tomatoes for updates!

There are no featured reviews for C'est le Bouquet at this time.