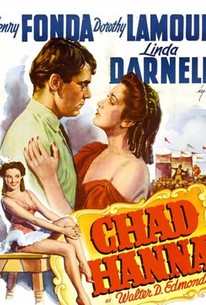 Henry Fonda plays Chad Hanna, a New York country bumpkin of the mid-nineteenth century who joins a travelling circus. He falls in love with beauteous bareback rider Dorothy Lamour, but she spurns him. Chad Hanna then finds himself attracted to another runaway, country girl Linda Darnell. Though everybody assumes that the boy is slow on the uptake, Chad Hanna manages to save the circus from financial ruin. He also secures the services of a trained elephant; when asked how he acquired such a prize, Chad laconically responds "I gave him half interest in the circus." A lightweight period piece, Chad Hanna is visually impressive, and best viewed in its original pristine Technicolor state.

Charles B. Middleton
as Sheriff

The whole movie is an accurate painting of the reality, with its rivalries, its struggles, its disappointments and its triumphs. [Full review in Spanish]

Circus drama with a cast far superior to the pedestrian script they were handed. They make the best of it but it's all very routine.