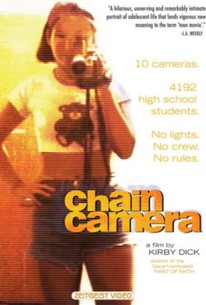 Wanting to make a film about American teenagers in the year 2000, filmmaker Kirby Dick took a novel approach; he went to John Marshall High School, a Los Angeles-area school with a racially and economically diverse student body, and gave ten portable video cameras to ten students, asking them to document their lives however they pleased for one week. Then each student passed his or her camera on to another student, who was to film his or herself in the same manner. This process continued throughout the course of the school year, after which Dick and editor Matt Clarke reviewed the footage, narrowing the focus down to 16 students; Chain Camera was the result. The student's stories range from a drum major having problems with her boyfriend and a girl from Armenia whose parents only want her to date boys from her native land, to a recovering drug abuser who spent much of his childhood looking after his mother (who had a severe drinking problem), and a boy originally from Chicago whose parents moved him to the West Coast to get him out of the Windy City's street gangs. Produced for the premium cable network Cinemax, Chain Camera debuted at the 2001 Sundance Film Festival.

Kirby Dick... edited 700 hours down into sixteen self-portraits of mostly anxious teenagers, a sort of United Nations of unhappiness, thinking out loud about fathers, sex, race, politics, drugs, and music.

Absorbing in places, but considering the large and diverse pool the filmmakers had to draw from, it's a surprisingly repetitive and predictable collection of big-city sagas.

Chain Camera may not provide a demographer's perfect cross-section of society, but it does provide a pungent, provocative slice of Americana.

Chain Camera is, at the very least, unfailingly candid.

Kirby Dick isn't in the habit of making his presence felt on camera, and his newest documentary allows his subjects to strictly speak for themselves.

On the whole, Chain Camera surprises in how it manages to mix entertainment and personal journeys.

Kirby's egalitarian impulses get the best of him as he devotes time pretty evenly to each student regardless of how interesting they are individually.

... a riveting, hopeful and heartbreaking film.

A series of brief snapshots of frustratingly varied quality...it doesn't get much beneath the surface.

While I thought this was an interesting look into the lives of high schoolers in LA I didn't think it was a great flick. It is disturbing to see most of these kids acting the way they were knowing that people would be viewing these videos. Candid talk about sex, drugs, and crime shocked me as none of these kids were even 18. We even see two of the folks doing drugs in the film. To me it seems as if most of the kids have already given up and resigned themselves to live out life with the idea that they can do no better than where they find themselves now. I really hope my kids don't fall into that trap as well.