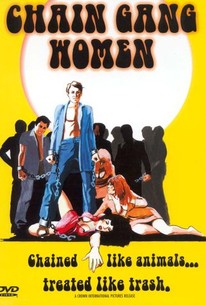 A model prisoner and a desperate thug become unwilling partners in this low-budget action picture. Weed (Michael Sterns) is patiently waiting out the last six months of a sentence for dealing marijuana when he loses his job in the prison library and is put on a rural work gang. Weed finds himself chained to fellow prisoner Harris (Robert Lott), who is serving life for rape and murder. Angry and violent Harris is determined to escape, and when he attacks a guard, grabs a gun and goes on the run, Weed has little choice but to join him. Weed leads Harris to the home of his girlfriend Ann (Linda York), who gives the escapees a place to stay while they plot their next move. Harris shows his true colors by raping Ann while Weed sneaks into town for supplies, and when the convicts' plan to leave the state goes awry, Weed sends her away while they make their own way. Harris and Weed happen upon the home of an elderly farmer (Ralph Campbell) and his much younger wife (Barbara Mills), but while the bride is looking for a way out of her life in the country, the farmer isn't about to let the bandits take his woman. Noted exploitation kingpin Lee Frost served as writer, director and cinematographer on Chain Gang Women, which despite its title only features two women in its cast.

There are no critic reviews yet for Chain Gang Women. Keep checking Rotten Tomatoes for updates!

1st of all, I wonder who came up with the title of this movie & what were they thinking? The title of this movie is Chain Gang Women so you'd expect a movie about women on a chain gang.There is a chain gang but there are no women.There were only 2 women in the whole movie.Just my 3 cents.I think Chain Gang Women was pretty good & kept me entertained the whole time.I really like all the twists & turns that were thrown in especially the ending that really suprised me.I did NOT see that coming!

A dude gets sent to a dude prison on a marijuana charge, then that dude is transferred to another prison full of dudes and gets shackled to a dude up for life on a murder charge. These two dudes work alongside a bunch of other dudes on a chain gang and one day make an escape. So, upon reaching the halfway point a rational person would ask himself, WHERE THE HELL ARE THE WOMEN??!?!!? I got bad news for you: there are only two plain Janes in this movie, and neither of them works on a chain gang. That deception alone is worth knocking this back to one star if it wasn't there already due to extreme boredom and extreme closeups of ugly dudes' faces. The one moment of zen is that you get treated to the fakest choking scene in movie history.

Well, this is definitely another case of a movie title that leads you astray. Chain Gang Women features two women - both of whom aren't in a chain gang and neither of which are the lead characters in the story. The movie's actually about a couple of guys who break out of prison and they're on the run from the police. Along the way there's rape, murder and general crazyness. The movie is flat-out awful, but in that "so bad it's good" way. There's nothing too redeemable about it, but there's some dialogue and line readings that had me laughing out loud at times. It's sort of a sexploitation movie, even though there's only one really lengthy sex scene in it, but it does play on that a bit. Along with the generic country and bluegrass score, it's definitely one you want to put on to have a few laughs with. It can be boring at times, but stay patient and you'll be rewarded with terrible lines like "I'll break us outta here. I know what I'm doing. I've done it twice before!"