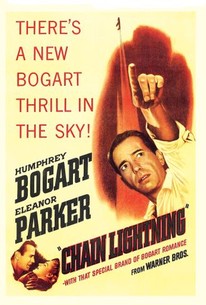 This second-echelon Humphrey Bogart vehicle casts Bogie as a bomber pilot who becomes a free-lance flyboy after the war. Eleanor Parker, Bogart's wartime love, is now the secretary of aircraft manufacturer Raymond Massey. Partly out of an effort to link up with Parker again, Bogart signs on as a test pilot for Massey's firm. Richard Whorf, Massey's safety supervisor, dislikes Bogart's grandstanding. When Whorf is killed, Bogart feels responsible. He volunteers to test Whorf's experimental escape device by flying at high-speed. The test is a success (though it's nip and tuck for a while), and Bogart survives for a final clinch with Parker. Completed in early 1949, Chain Lightning was held back from release until 1950; it was Humphrey Bogart's final Warner Bros. film. ~ Hal Erickson, Rovi

Humphrey Bogart made so many great films at Warner Bros. that it's disappointing his final collaboration with the studio turned out to be one of his weaker efforts.

There are no featured audience reviews yet. Click the link below to see what others say about Chain Lightning!