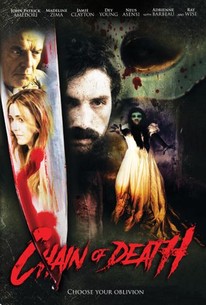 CHAIN OF DEATH, written by Porras (INSIDE THE BOX, IDA Y VUELTA) and Andres Rosende (THE BEAR, ESCAPE, SNAPSHOTS) and produced by Elisa Lleras (BITCH, INSIDE THE BOX, FRANKENSTEIN), follows the story of Dr. Mike Colleman (Amedori), a brilliant young doctor who's married to the girl of his dreams while enjoying the big city life. The fairy-tale lifestyle comes to a screeching halt as Mike learns that his mother Emma (Barbeau) can no longer take care of his father (Wise) who suffers from a Parkinson's Disease-like ailment and whose health is in a downward spiral. Soon Mike learns that he too suffers from the exact same neurological illness as his father and decides to voluntarily enter a "Chain" of assisted suicides in an effort to end his own misery. There's only one catch -- if you want to die, you must kill someone first.

Critic Reviews for Chain of Death

Genre fans will be happy to see Barbeau and Wise, as well as the brief but gasp-inducing moments of gore. But it's laughably bad, leaving audiences to giggle while wondering if they're sharing in Mike's hallucinations or this crazy movie actually exists.

I can't commend the script enough. The supporting performances, particularly from Wise and Asensi, are riveting.

The film's pacing is a little uneven, and it builds to a climactic sequence that's more than a little preposterous, but the story has some bonkers twists and turns that make it compulsively watchable.

A thriller about the relationship between a father and his son. A really interesting perspective. [Full review in Spanish]

[The film's] Shyamalanesque traps are not effective. [Full review in Spanish]

There are no featured reviews for Chain of Death at this time.