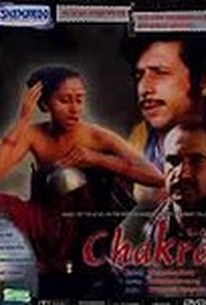 Amma (Smita Patil) is a woman who has been raped and then forced to flee her home with her husband and child after her husband kills the rapist. Her life plunges even lower in the overwhelming and crowded city when her husband, in turn, is killed by smugglers. Left alone to fend for herself and her little boy, she desperately tries to instill moral values in her son in spite of the immorality of life all around them. She is indirectly aided in this effort by a dubious hero-type, but there does not seem to be much hope for her future and that of her son. ~ Eleanor Mannikka, Rovi

There are no critic reviews yet for Chakra. Keep checking Rotten Tomatoes for updates!

There are no featured reviews for Chakra at this time.