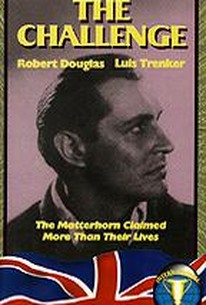 The British adventure film The Challenge is based on a real-life turn-of-the-century competition. The race is on between a team of British mountain climbers and a government-sponsored Italian team to conquer a hazardous alpine peak. Edward Whimper (Robert Douglas) heads the English expedition, while Jean-Antoine Carrel (Luis Trenker) is in charge of the Italians. Actual footage of the Alps is seamlessly blended with studio mockups. Emeric Pressburger, on the verge of his felicitous teaming with Michael Powell, wrote the original story for The Challenge. ~ Hal Erickson, Rovi

Lawrence Baskcomb
as The Podesta

Critic Reviews for The Challenge

There are no critic reviews yet for The Challenge. Keep checking Rotten Tomatoes for updates!

Audience Reviews for The Challenge

"The Challenge" has been made several times but the original from 1938 remains the greatest and most acclaimed. The film features multiple countries and nationalities trying to reach the summit of an unconquered peak in the Alps. The film isn't just about climbing but also of loyalty, betrayal and ultimately friendship. Throughout the climbs there is loads of tension and suspense that is heightened through the frantic and fast paced score and really add to the sense of danger felt by those that climb. The footage used (A lot of it was of the Alps and some studio mockups) is exceptionally beautiful and majestic. "The Challenge" is a great action/adventure film that makes for a wonderful drama as well and is a solid film overall.