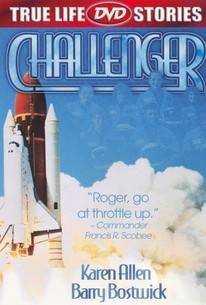 Made for television, The Challenger is at once a tribute and a eulogy to the seven courageous souls who perished when the Challenger space shuttle exploded 73 seconds after liftoff on January 28, 1986. Though all of the crew members are given three-dimensional, balanced treatment, the one we all remember is schoolteacher Christa McAuliffe. As played by Karen Allen, McAuliffe is neither superwoman nor saint: just an average human being with an insatiable thirst to learn more about the universe around her. The other members of the ill-fated crew are Cmdr. Francis R. Scobee (Barry Bostwick), Captain Michael J. Smith (Brian Kerwin), Dr. Judith A. Resnik (Julie Fulton), Lt. Col. Ellison Onizuka (Keone Young), Dr. Ronald E. McNair (Joe Morton) and Gregory B. Jarvis (Richard Jenkins). Wisely, the film concentrates on the crew's training, ending before the tragic real-life denoument. Filmed on location at the Johnson Space Center, the 3-hour The Challenger was originally telecast February 25, 1990.

Richard Jenkins
as Gregory B. Jarvis

There are no critic reviews yet for Challenger. Keep checking Rotten Tomatoes for updates!

There are no featured audience reviews yet. Click the link below to see what others say about Challenger!