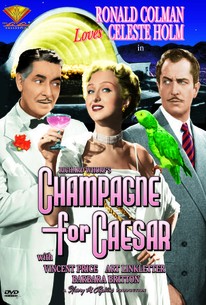 This comedy stars Ronald Colman as Beauregard Bottomley, a self-styled genius in need of a job. He applies for a position with a large soap company, but Burnbridge Walters (Vincent Price), the firm's willfully eccentric president, falls into a "trance" while interviewing Beauregard and decides not to give him the job. When Beauregard overhears his sister Gwenn (Barbara Britton) listening to a game show sponsored by Walters' soap company, he discovers the perfect means to get revenge -- each time a contestant answers a question correctly, they double their prize money. Beauregard gets a spot on the show and starts winning -- and doesn't stop. Before long, the company owes him $40 million and Beauregard hasn't even broken a sweat. Beauregard is poised to bankrupt Walters and destroy his company, so the soap tycoon persuades Flame O'Neal (Celeste Holm) to pose as a nurse who will (a) find out if there's anything Beauregard doesn't know, and (b) distract him romantically. While a critical success and something of a cult item, Champagne for Caesar was a box office disappointment on its initial release; Ronald Colman appeared in only two more films before his death eight years later.

John Eldridge
as Executive
View All

Critic Reviews for Champagne for Caesar

Has a field day spoofing the moronic TV shows sponsored by soap companies.

Audience Reviews for Champagne for Caesar

Cute comedy but rather thin and not worthy of the talents of the top lined trio. Points however for the audacity to name Celeste's character Flame.

One of my favourite 50s comedies, especially because of Price's performance, he's hilarious. The story is really clever and funny as well, and Colman is the perfect choice to play the main character. If you're a fan of either of them, I highly recommend checking out this movie.