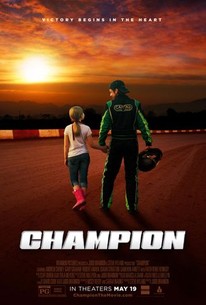 Dirt track racer Sean Weathers was at the top of his game...an unstoppable career, scores of fans, and an adoring daughter. When a rivalry with another racer turns personal, the ego that propelled him to success causes a tragedy, sending his life into a tailspin. Jack Reed was attempting to make up for past mistakes. He had prospered as a businessman but failed as a family man. In a sudden turn of events, his chances for reconciliation are ripped from his grasp. Sean and Jack's lives collide, and an unexpected bond forms between them. Working through a painful journey of healing together, they each learn about second chances and the true freedom only forgiveness can offer.

There's a lot of things to cry "WHYYYYYY" into the sky to when it comes to this movie, but I think the honkytonk open source country music that's playing as the score during the film may be one of the worst offenders.

There are no featured audience reviews yet. Click the link below to see what others say about Champion!