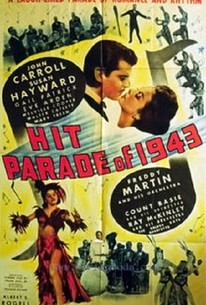 In this musical, the third entry in a five-film series, a has-been songwriter, desperate for a hit, steals another's song. The real composer catches him, so he begs her to become his ghostwriter. She agrees, not because she is nice, but because she hopes to really embarrass him when the songs become popular. Fortunately, a romance ensues and the story ends on a happy note. Songs include: "Take a Chance," "Who Took Me Home Last Night," "Tam Boom Bah," "That's How to Write a Song," "Harlem Sandman," "Do These Old Eyes Deceive Me," "Yankee Doodle Tank," and "Nobody's Sweetheart."

Jack Williams
as The Harlem Sandman

Chinita
as Speciality Dancer
View All

Critic Reviews for Change of Heart

There are no critic reviews yet for Change of Heart. Keep checking Rotten Tomatoes for updates!

Audience Reviews for Change of Heart

Minor programmer has a silly plot but Susan Hayward, looking beautiful, is saucy in the lead and was actually engaged briefly in real life to costar and Clark Gable lookalike John Carroll. Eve Arden is thankfully aboard to offer her peerless wisecracks and look glamorous. Gail Patrick is also on hand as a silky villianess. They are all better than the nothing script deserves. On top of that you get Count Basie and Dorothy Dandridge in a wonderful specialty number. With all the superior talent involved it's worth catching once but that will probably be enough.