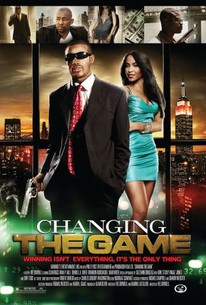 Changing the Game is a searing universal drama that chronicles the life of a young African-American, who spends his childhood on the mean streets of North Philadelphia. Raised by his spiritual grandmother, he ends up going to an Ivy League school, shines bright and ends up landing the American dream job on Wall Street. Enjoying the posh and enviable life on Wall Street as one of its top players, his life takes the most serious of turns when he realizes that Wall Street is a lot like growing up on the mean streets of North Philadelphia, but now there are other villains he must contend with as well as racism and jealousy. He meets shrewd and diabolical characters at every turn that threaten to add him to the list of statistics...another African-American male dead or in jail before his prime. -- (C) Official Site

Critic Reviews for Changing the Game

Although Riggs turns in a workmanlike performance, the rest of the cast is weak, with rare exceptions.

Dowdell shows promise as a director and if he can reach the next level on his scripts, he'll be an independent director worth keeping an eye on in the future.

Touching on a litany of timely themes, this modern morality play of Shakespearean proportions packs an emotional punch while sending a sobering message about what really matters most.

Changing the Game doesn't have the resources of a Hollywood movie, that's obvious. But it has one thing many Hollywood movies do not have -- an ending.

Any forced note is counterbalanced by the greater amount of right ones.

Audience Reviews for Changing the Game

Drawing inspiration from Niccolò Machiavelli's "The Prince" and "Sun Tzu's The Art of War", THE classic, go-to books for strategists, be they salespeople, stockbrokers or sports coaches, "Changing the Game" finds the connection between the mean streets of Philly and the cutthroat world of Wall Street and spins a tale of a smart man's rise to the top of the ladder, achieving financial success with its share of intrigue, deception and danger, and tells it with a little bit of 80's flair. The acting's not going to set the world of fire, but the work of this certainly talented cast of unknowns is good and well-suited to the material. Tighter, seamless editing would've helped, as well as a more polished script, but all in all, "Changing the Game" is an interesting analogy between two worlds that seem different but are more alike than you might think.