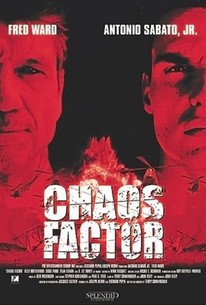 In this tense military thriller, intelligence officer Jack Poynt (Antonio Sabato Jr.) discovers evidence of a CIA-backed raid on a medical facility in Cambodia in 1972, which led to the torture and slaughter of a number of innocent civilians. Poynt decides it's high time that the men responsible were exposed and brought to justice, but the deeper he digs in search of the truth, the more he finds himself in danger. The Chaos Factor also stars Fred Ward, R. Lee Ermey, and Kelly Rutherford.

Critic Reviews for The Chaos Factor

There are no critic reviews yet for The Chaos Factor. Keep checking Rotten Tomatoes for updates!

Audience Reviews for The Chaos Factor

Capt. Jack Poynt (Antonio Sabato Jr.) is a Military Intelligence Officer who is assigned to duty in Vietnam. While there his primary task is to locate and destroy land minds and any other artifact which is believed to be U.S. property. What he discovers instead is a personal soldier's diary depicting a secret and covert operation in which the Vietnamese locals were captured, tortured, murdered and subjected to chemical toxins under the direction of Col. Max Camden (Fred Ward) and the men of his special task force. Worse, the soldier's diary reveals the fate of Poynt's own mother, an army nurse who opposed Camden's genocidal activities and whom Camden had executed. Capt. Poynt seeks to bring these men to justice only to discover Camden is advising the US Secretary of Defense to take a hard-line against the Chinese Government. Poynt's revelations could derail Camden's agenda and mar his reputation thus Camden would rather destroy him and the journal than have it resurface in the press. Luckily Poynt acquires an ally in Communist agent Kim (Susie Park in the best portrayal of a female agent in tight black leather since Charlie's Angels), whose mission is to undermine and then assassinate Camden. Together the two fight to expose the evil plot which is rooted in anti-Asian prejudice.