Charge of the Light Brigade1968 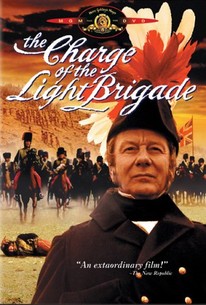 Charge of the Light Brigade Photos

Tony Richardson (Tom Jones) directed this icy examination of the doomed charge made legendary by Tennyson's poem. The film takes place in 1854, 39 years after Napoleon was defeated at Waterloo. Lord Cardigan (Trevor Howard) and a group of aristocratic British soldiers desire to seek military glory. Cardigan wants to lead an army to help protect the Ottoman Empire from Russian invaders but he gets into an argument about it with Captain Lewis Nolan (David Hemmings), recently returned from India. But when England declares war, the two set aside their differences and set sail for Turkey. In Crimea, the British army suffers through hunger and disease, but they win a victory over the Russians. But now the British become complacent and careless. As the Battle of Balaklava begins, confused orders and incompetence sends Cardigan's Light Brigade into the wrong valley, heading straight for the Russian cannons.

Natasha Richardson
as Flower
View All

Critic Reviews for Charge of the Light Brigade

It is pretty, but how much of it is relevant?

The Charge of the Light Brigade now seems brilliant and to the point.

Audience Reviews for Charge of the Light Brigade

A lot of great actors stuck in this dull mess.

In the middle of the 19th century, Captain Louis Nolan(David Hemmings) returns to his native England from India to celebrate the marriage of his best friend William Morris(Mark Burns) to his beloved Clarissa(Vanessa Redgrave). While in country, he signs up for the elite Hussars, commanded by Lord Cardigan(Trevor Howard) while extending an invitation also to his friend. While that is the way officers are recruited, the company goes to the lowest dregs of humanity for its enlisted men. Regardless, things do not go well for Nolan as Cardigan bristles at his having an Indian servant(Dino Shafeek) which can only serve as a reminder of Nolan being the only one around with any kind of real military experience and able to tell one end of a gun from the other, trapped in a veritable gentleman's club. The often slack pace of "The Charge of the Light Brigade" stops it from reaching its full satirical potential. At the very least, it maintains a bitterly ironic tone throughout, expressed perfectly in the animation inspired by political cartoons of the period. The movie's simple message is that the most dangerous person in a war is an old man seeking glory, one man's battlefield honor equal to a large group's senseless slaughter. Making this worse is the Crimean War being one of the more pointless wars in history, if that is possible. By this time, the nobility has been waiting a good long time since the Napoleonic Wars for something like this and the recent death of the Duke of Wellington hangs over them all, especially Lord Raglan(John Gielgud) who has an especially good view of his statue. In the meantime, they forgot the most important lesson of those previous wars was to not invade Russia.

Two things - (1) MGM makes by far the crappiest DVDs on the planet. (2) The inconsequential romance is an established part of the cinematic repertoire. Countless number of scripts have been padded with love stories which have little or nothing to do with the film's narrative thrust. I accept this. However. The love story tossed into this tale of Britain?s misadventures in the Crimean War may actually rank as the most dispensable of all. I actually felt sorry for actress Vanessa Redgrave who at the time happened to be married to the film's director, Tony Richardson. Aaah yes, , the movie. Well, it's a sarcastic and somewhat incoherent look at British military culture in the 1850s. The script, the cast and the visuals are all on a very grand scale but the film ultimately lacks focus. Features some entertaining animated inserts which help spell out the afformentioned narrative thrust while all the fine actors ramble on and the horses gallop to and fro.

Charge of the Light Brigade Quotes