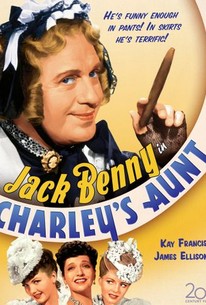 This version of the popular comedy based on Brandon Thomas's play features comedian Jack Benny as the lead. It is his first time playing a substantial role. The plot follows the exploits of Babbs, an Oxford student, who dresses up as a matronly aunt so he can chaperone two of his buddies, Charley and Jack who want to take two women to "tea." Complications ensue when Babbs is chased by two elderly gentlemen. Things get much worse when Charley's real aunt appears.

Will Stanton
as Messenger

Maurice Cass
as Octogenarian
View All

There are no critic reviews yet for Charley's Aunt. Keep checking Rotten Tomatoes for updates!

There are no featured reviews for Charley's Aunt at this time.