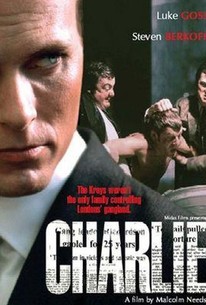 British filmmaker Malcolm Needs writes and directs the gangster film Charlie, based on the real-life case of criminal gang boss Charlie Richardson. During the early '60s, brothers Charlie (Luke Goss) and Eddy (Langley Kirkwood) ruled the criminal underworld of South London. As he rises in power, Charlie finds himself connected with wealthy white South African businessman Richard Waldeck (Leslie Grantham). Charlie eventually starts to get involved with political crimes involving the ANC and gets caught. While on trial in 1966, his gang resorts to the horrific torturing of his enemies. The witnesses who testify against him are cruelly and unusually punished by Charlie's terror gang, leading to Judge Lawton (Antony Carrick) sentencing him to 25 years. Steven Berkoff and Anita Dobson appear as Charlie's parents. Charlie premiered in the U.K. in February of 2004.

Less flashy and overblown than many of its contemporaries, yet sketchy and impersonal enough to keep you entirely at arm's length.

There are no featured audience reviews yet. Click the link below to see what others say about Charlie!