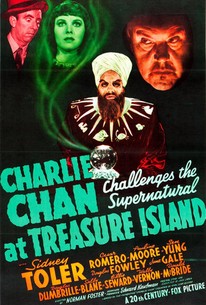 Movie buffs are nearly unanimous in agreement: Charlie Chan at Treasure Island is the best of the Sidney Toler "Charlie Chan" entries. The film wastes no time getting started, with Chan (Toler) and his son Jimmy (Sen Yung) on hand when Charlie's writer friend Paul Essex (Louis Jean Heydt) dies on the Honolulu Clipper while en route to San Francisco. The police rule Essex' death a suicide, but Chan believes differently. He follows the trail of clues to the mysterious Zodiac, a crooked spiritualist. The oriental detective is aided in his investigation by Rhadini (Cesar Romero), a charming stage magician who hopes to expose Zodiac as a phony and blackmailer. After several plot twists and a couple of additional murders, all the likely suspects are gathered together during one of Rhadini's performances at Treasure Island, the San Francisco branch of the 1939 World's Fair. In a truly eerie climax, mystic Eve (Pauline Moore) who really does have psychic powers, prepares to name the killer. The revelation of the culprit is a genuine surprise, staged with topnotch showmanship by director Norman Foster, whose wife Sally Blane (Loretta Young's sister) appears in a small role as Essex's widow. Many of the magicians' props utilized in Charlie Chan at Treasure Island would do service again in 1942 in the Laurel & Hardy vehicle A-Haunting We Will Go.

Trevor Bardette
as Abdul the Turk

The most highly regarded of the Sidney Toler Charlie Chan series.

An invigorating Charlie Chan escapade and the best one in the series...

There are no featured audience reviews yet. Click the link below to see what others say about Charlie Chan at Treasure Island!