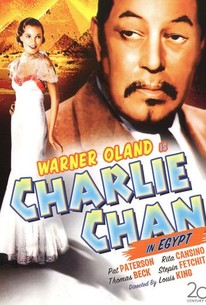 As much a horror film as a murder mystery, Charlie Chan in Egypt is one of the best entries in the "Chan" series. The story is motivated by a King Tut-like curse, which has apparently befallen the members of an archeological expedition. Charlie Chan (Warner Oland) is brought into the case when a French museum wants to find out how several valuable Egyptian artifacts, originally slated for museum exhibition, have ended up for sale to the highest bidder. Arriving in Egypt, Chan must first figure out the modus operandi for two murders in which neither a weapon nor a wound was found. The solution to the killings involves a certain musical pitch played on a violin (a familiar mystery-movie device of the period). Though the screenwriters do a good job concealing the identity of the villain, Fox Studio's typecasting policy tends to give away that identity somewhat ahead of schedule. Prominent among the supporting players is black comedian Stepin Fetchit, whose stereotyped routines may offend the sensibilities of modern viewers. Originally released at 72 minutes, Charlie Chan in Egypt is currently available only in its choppy, shortened reissue version.

There are no featured audience reviews yet. Click the link below to see what others say about Charlie Chan in Egypt!