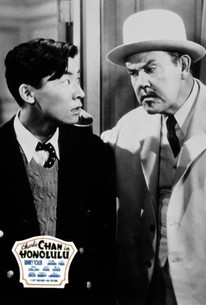 Sidney Toler made his first appearance as aphorism-spouting oriental sleuth Charlie Chan in 1938's Charlie Chan in Honolulu, while Victor Sen Yung likewise makes his series debut as Charlie's Number Two Son Jimmy. While awaiting the birth of his first grandchild, Chan endeavors to solve a shipboard murder on a Hawaiian freighter. Hint: the most likely suspect is played by George Zucco, so it's safe bet that he's not the guilty party. Hampering Chan's investigation is the well-meaning assistance of overeager Charlie Chan Jr. (Layne Tom), as well as the dangerous menagerie of animal trainer Al Hogan (Eddie Collins). Audiences immediately warmed to Sidney Toler as the new Charlie Chan, encouraging 20th Century-Fox to keep the series going as long as possible.

There are no featured audience reviews yet. Click the link below to see what others say about Charlie Chan in Honolulu!