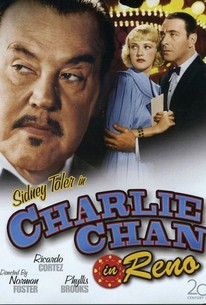 Sidney Toler made his second appearance as oriental sleuth Charlie Chan in the above-average Charlie Chan in Reno. It all begins when nervous young Mary Whitman (Pauline Moore) shows up in Reno to seek a divorce from husband Curtis Whitman (Kane Richmond). Before long, Jeanne Bentley (Louise Henry), another divorce-seeker, is found slain, and the police are certain that Mary, or her estranged husband, is responsible. It so happens that the Whitmans are from Honolulu, the stamping grounds of Charlie Chan, which is why our wily hero shows up in Nevada with son Jimmy (Victor Sen Yung) in tow. Every so often, the mystery slows down long enough for an amusing battle of wits between Chan and local sheriff Fletcher (Slim Summerville), who admittedly has only half the necessary ammunition. The billing order of the supporting cast is as usual a giveaway of the true killer's identity, but this doesn't lessen the enjoyment of this well-crafted programmer. Charlie Chan in Reno was based on Death Makes a Decree, a story by Philip Wylie.

This was an above-average Charlie Chan.

There are no featured audience reviews yet. Click the link below to see what others say about Charlie Chan in Reno!