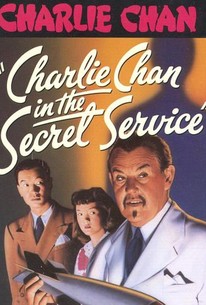 Having ended its 11-year run at 20th Century-Fox, the "Charlie Chan" series set up shop at Monogram with the singularly uninspiring Charlie Chan in the Secret Service. Sidney Toler returns as the famed oriental detective, who, per the title, is now a government agent. His first assignment is to solve the murder of an inventor and recover the victim's secret plans. Two reels into the picture, all action grinds to a halt as Chan wearily interrogates the suspects. The identity of the murderer might have caught some filmgoers by surprise in 1944, but seasoned mystery fans will beon to the game the minute the culprit is introduced. The one saving grace of Charlie Chan in the Secret Service is the stereotypical but undeniably funny comedy relief of Mantan Moreland, making his first appearance as pop-eyed chauffeur Birmingham Brown.

Critic Reviews for The Secret Service

Audience Reviews for The Secret Service

Pretending to be a mystery thriller (hey, it's Charlie Chan!), relax, it's more like a comedy with the obligatory murders actually being additional jokes thrown in to mystify and confuse you. Okay, okay, yes the piece is not only racist, but that's where most of the yuks come from. Nonetheless, your grandma and grandad's chuckles still have some life to them.