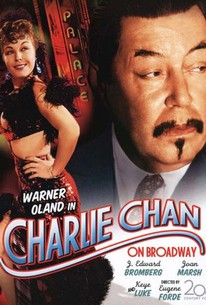 In New York to attend a police testimonial in his honor, Honolulu detective Charlie Chan runs smack dab into another murder. The victim is a blackmailing nightclub singer who had listed the names of all known criminals in Manhattan in her diary. The diary disappears, and Charlie joins a glib newspaper reporter (Donald Woods) and a photojournalist (Joan Marsh) in hunting down the killer. Several false leads and red herrings later, Charlie puts the pieces together and fingers the killer--who true to form is the least likely suspect (especially for a "typical" New York murder case). Charlie Chan on Broadway represented the 15th appearance by Warner Oland as the aphorism-spouting Oriental sleuth.

Billy Wayne
as Reporter
View All

There are no featured audience reviews yet. Click the link below to see what others say about Charlie Chan on Broadway!