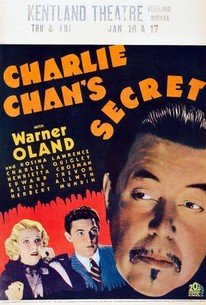 A serial-like pace and some stylish directorial choices by Gordon Wiles distinguish this "Charlie Chan" entry. The reading of a will is delayed until one of the principal heirs to the fortune, can be located. He shows up at the family mansion, only to be promptly murdered. It is now up to detective Charlie Chan (Warner Oland), an old friend of the family, to protect dowager Henrietta Lowell (Henrietta Crossman), from harm. Alas, Chan apparently fails, and Henrietta falls victim to the mysterious killer -- or does she? The suspect roster includes a pair of phony mystics, an ill-tempered caretaker and a stock swindler -- but it's the least-likely suspect who proves to be the guilty party, one of several of the many surprises packed into the final reel. The appealing heroine in Charlie Chan's Secret is played by Rosina Lawrence, who later gained lasting fame as the schoolteacher in Hal Roach's Our Gang one-reelers.

Landers Stevens
as Coroner
View All

...doesn't offer the guided tour to out-dated attitudes that might be anticipated...

There is much that is unique.

Warner Oland as Charlie Chan helps a good deal, but the plot is more complicated than ingenious.

Standard entry into the popular series canon with A Brit butler taking over the usual "Number 1 Son" comic duties. Red herrings galore until the "all the suspects in one room while the detective explains what we've been watching" payoff. Always decent entertainment value even if often nonsensical.